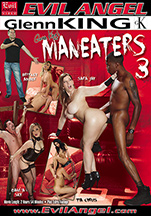 Glenn King's Maneaters 3 Summary: Fetish director Glenn King loves to explore dominant females - mean, sexy bitches with no inhibitions about taking whatever they want from the weaker sex. In "Glenn King's Maneaters 3," four aggressive ladies demand pleasure, and if they have to overpower a pathetic man to fulfill their quest, no problem! Each scene begins with a solo, POV-style introduction from your horny mistress. Busty, big-assed bombshell Sara Jay wants black dick, so she gets Isiah Maxwell for an interracial session of fucking and foot play. Gorgeous blonde Britney Amber gets filled with stiff meat and takes a load on her chest. Petite, bratty young bitch Tia Cyrus bosses around black stud D Snoop, grinding her sweet, little ass in his face and fucking him until he spurts helplessly onto her back. Sultry, leather-clad domme Dahlia Sky makes slave Jack Vegas submit to face sitting and hard fucking; she allows him to bask in the aroma and taste of her sheer nylon-clad feet.