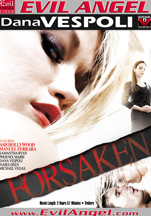 Forsaken Summary: Star performer Dana Vespoli is the newest member of the Evil Angel roster of elite pornographers, and for her debut production, the gorgeous and intense fetish queen has created a feature film made up of several passionate fuck scenes. Forsaken is the story of a girl who wakes up in the woods with blood on her dress, but no wounds. She has no memory of who she is and sets off to solve the mystery, having flashbacks of her life and meeting some creepy characters along the way. This is one girl's dangerous sexual odyssey into a devious, dreamy underworld, where she bears witness to acts of depravity and cannot decide if she's truly lost... or merely dreaming. That's the gist of this dark and strange tale, but the work of Dana's incredible female cast - stunning blonde protagonist Ash Hollywood, sleek and luscious brunette Samantha Ryan, plush Phoenix Marie and, of course, the sensuous director herself - has forged a spooky, alluring drama that's more than the sum of its parts. As young Ash discovers more clues to the bizarre events of the past, she sees and experiences SM-tinged hard-core sex with lovely women and big-dicked strangers, along with hallucinatory visions, all leading down to a shocking conclusion. Dana Vespoli's Forsaken takes the viewer on a seductive journey into the heart of erotic madness.

Write a review about Forsaken: