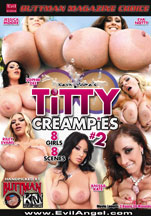 Titty Creampies 2 Summary: Director Kevin Moore loves girls with big, bobbling boobies. In "Titty Creampies #2," an all-POV release from the Buttman Magazine Choice line of specialty smut, Kevin showcases eight voluptuous ladies wrapping their jugs around hard dick and working it to completion! The director (or another stud) slides his shaft between a buxom girl's bulging bazooms until he shoots his hot semen right in her cleavage - with no jacking off. This is how titty fucking was meant to be! First, Kevin samples the plump, dangling udders of luscious blonde cover girl Jessica Moore and spills his seed in the cleft of her bosoms. Next, super-fine brunette Anissa Kate oils her giant rack for Kevin's hard-on and receives a sticky mass of cum on her chest. Auburn-haired Euro-mom Eva Notty presses her enormous, glistening melons around the director's tool, and blonde MILF Riley Evans pleasures Eric John using the space betwixt her firm ta-tas. Bodacious brunette Sophie Dee blows Kevin, expertly handling his cock with her large globes. A voyeur peeks through a doorway at stunning, naturally stacked Abbey Brooks while she applies lotion to her fine tits; she invites him in for an intimate, sensuous boob fuck. Tattooed hard body Angelina Valentine is a no-nonsense slut who takes control of the offered meat and earns herself a gooey prize. Last but not least, cushiony cutie Alex Chance treats Chad Diamond to a sensual blow job and a ride between her soft, all-natural whoppers. Titty Creampies #2 is for breast men who like to keep their attention up top. As Kevin puts it, "Why pull out for the best part?"

Write a review about Titty Creampies 2: