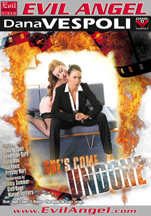 She's Come Undone Summary: The newest woman on Evil Angel's roster of elite pornographers, gorgeous director Dana Vespoli is making her mark with a succession of feature videos using serious dramatic themes to anchor explosively nasty, hard-core sex. In She's Come Undone, Dana portrays an actress whose professional, interpersonal and sexual lives are all spiraling out of her control. Stuck in a waning relationship with blonde MILF Julia Ann and struggling with memories of past breakups and ill-considered flings, she flirts with danger through rough sex and autoerotic asphyxiation. Grasping in desperation for anyone or anything that can provide an illusion of stability, Dana calls on an escort service and arranges a session with beautiful Sovereign Syre - a prostitute with her own demons to face, including the ruthless ex-girlfriend (Lea Lexis) who pimped and betrayed her. Mixed into this downbeat tale of soul-searching, alienation and the quest for love is some of the hottest and most intense lesbian sex ever, with rough dildo action, foot play, slapping and domination, all underscored by the ambiguous motives of the intriguing characters. Pretty, young Presley Hart stars as an exploited fan; Sinn Sage, India Summer and Manuel Ferrara make brief, special appearances. And the DVD offers some revealing behind-the-scenes footage. She's Come Undone is a truly adult story that stands out among the lightweight traditional tropes of all-girl smut. It's a man's world, and women can be brutal!