EvilAngel Video » Belladonna » What An Asshole 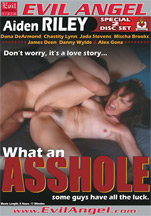 Aiden Riley's "What An Asshole" is a double-disc DVD with extensive behind-the-scenes footage, photo galleries, cast list, filmographies and trailers.

Write a review about What An Asshole: