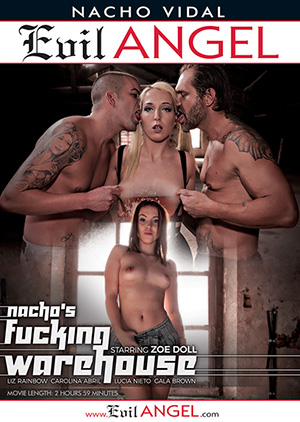 Nacho's Fucking Warehouse Summary: Legendary cocksman Nacho Vidal and his horse-hung buddies deliver dirty, industrial-strength fucking to saucy Spanish vixens in the murky depths of "Nacho's Fucking Warehouse." Holing up in the fuck fortress, cock-hungry, all natural Carolina Abril gets a double dose from Nacho and accomplice Alberto Blanco. She deep-throats dicks and they take turns railing her pussy, finally blasting her face with dick sauce. Carolina lies cum-covered on the floor, begging for more! Pig-tailed hottie Liz Rainbow takes a dual dicking from Nacho and his hung sidekick, Potro De Bilbao. She stuffs both cocks into her mouth at once, and they reward her with a facial semen shower. Spanish vixen Lucia Nieto takes the brunt of super-endowed Chris Diamond's throbber; he feasts on her holes and she fights to take his log as deeply down her throat as she can. Nacho and Alberto Blanco prick-plunge auburn-haired Gala Brown, and two hefty loads fly over her backside. Delectable tart Zoe Doll points her ass skyward as Chris Diamond and Nacho do her doggie-style in a pussy-pumping free-for-all.