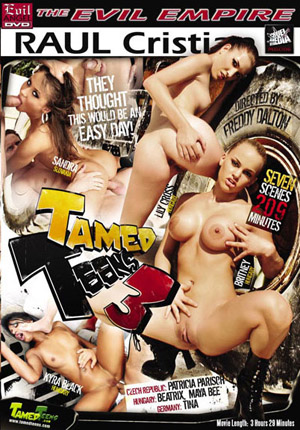 Tamed Teens 3 Summary: Raul Cristian is the man - he gets the hottest Euro girls (many of which appear with Christoph Clark and Rocco too). His videos are always well lighted and clear. His videos have total title integrity ? you get exactly what is advertised. And, it turns out, he has a nasty, perverse sense of humor - as in Scene 2 of Tamed Teens 3 where the girls are brought into the scene in the shovel of a earth moving tractor, and then the guys walk into the scene wearing a Santa Claus hat on one dude and a hard hat and sledge hammer on the other dude. Tamed Teens 3 gives us 6 scenes chock full of one thing: young women who are the absolute hottest girls in Europe getting fucked in every hole and swallowing cum. In Scene 1, Sandra meets director Raul Cristian in a sunny park in Budapest. The sexy brunette has an awesome ass which she puts on display bent over a park bench. In Scene 2, Lily and Brittney are delivered in the scooper of a large piece of earth moving equipment. The blond has a particularly hot ass. In Scene 3, Beatrice is a platinum blond with a great body. She too has a great ass, which she pushes out for the camera. In Scene 4, Kara has black hair and full lips - all the better for her to suck cock! In Scene 5, Maya B gives Raul a tease while wearing pink lingere out side on a deck. In Scene 6, Patricia makes her debut to the scene and to porno inside a black plastic box used for a piece of equipment.

Write a review about Tamed Teens 3: