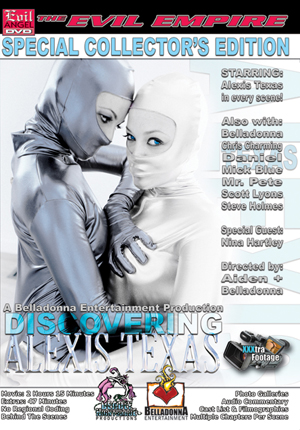 Discovering Alexis Texas Summary: The entire story is best understood through the lens of the final scene, which is brief, but telling. In the last scene 6, Nina Hartley says, "That's my story, I love who I am," revealing herself as the narrator of 5 sex scenes, played by Alexis Texas, who has an ass to rival Nina's. Nina whips Belladonna, who is in the corner, ass out to receive the leather blows. Scene 1 is a young, college age Alexis who gives a blow bang in payment for some Mary Jane. Scene 2 is an experimental Alexis, learning to give a blow job from Bella and a friend – but a lot more than one blow job is learned. Scene 3 is Alexis fucking 2 guys. Scene 4 is a lesbian scene with Bella, both clad in body suits. Scene 5 is a more mature Alexis, flashing her lover in a subway before fucking him against a semi-opaque wall in a continuing progression of Director Belladonna's experimentation with light as an erotic companion. After the credits, a dreamy foot scene for fans of Odd Jobs comes as a pleasant surprise, almost a day dream.