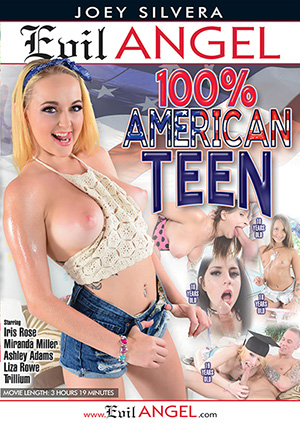 100% American Teen Summary : Dirty, old director Joey Silvera captures the spirit and sass of bratty sexuality in "100% American Teen." Self-assured smart-ass Ashley Adams, 18, admits it's fun to be a slut. Dominant Xander Corvus mashes and manhandles her little bod, binding her wrists and slapping her big, real boobs, cute ass and pouty face. She lewdly extends her tongue under his balls as she deep-throats, and she takes a sweaty fuck. Girly Liza Rowe, 18, has puffy lips, braces, wispy pubes and little titties. Richie Black spanks her hot, greased ass. Liza blows dick like she means it, gagging and slobbering. She closes her eyes in reverie as she rides meat, grunting in bliss. Silly, giggly blonde Iris Rose, 18 and a former cheerleader, yelps and whines as she's fucked, her big, natural boobs blushing in orgasm. She howls as she's butt-fucked and sucks cock ass-to-mouth. Strawberry blonde Trillium seduces a workman into dominating her. Gag-spit drips from her nose, which her stud pinches closed. After a fuck, she jerks his jism into her mouth and declares herself "cum-drunk." Joey shoots POV-style as freckle-faced, barefoot Miranda Miller goes down on him. "You like when I do that, Daddy?" she asks. After her French-manicured fingers jack out his jism, she tells him she's 18.

Write a review about 100% American Teen: