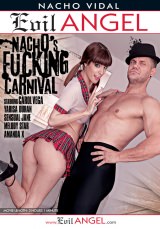 Nacho's Fucking Carnival Summary : Spanish director/stud Nacho Vidal dresses hot sluts for his "fantasies, dreams and madness" in "Nacho's Fucking Carnival" - there's a schoolgirl, a maid, a geisha, a princess and a whore. Slim "student" Carol Vega wears ponytails and a plaid skirt almost as tiny as her waist. She sucks cock, red painted lips caressing huge head; groans as her pussy stretches to fit his monster meat; and jacks his oiled prick like it's her own. Brunette MILF Sensual Jane's massive, natural jugs and crevasse of cleavage spill from an exceedingly low-cut French maid's uniform. A titty fuck envelops young Alberto Blanco in spectacular breast meat; she rides his big boner, boobs a-swayin', and he spunks her deeply cleaved bosoms. Submissive Yarisa Duran is gorgeous in a geisha's kimono, make-up and hairdo. A slab of dick down her throat makes her drool all over her natural knockers, which Nacho squeezes and slaps before having her cunt. Petite-but-buxom Melody Star looks like a princess in a frilly dress and tiara, with leopard spots dyed into her hair and blonde-highlighted eyelashes! Her cheeks and butthole flex as she rides cock, with long blonde locks flowing to her butt. Racy Amanda X wears pink hooker lingerie, boots and nothing else. Nacho porks her up the ass as Amanda howls and masturbates.