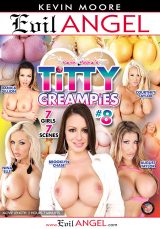 Titty Creampies 8 Summary: What happens when boobs are so large, luscious and lubricated that you can't resist sticking your prick into the heaving cleavage? We see the answer in the seven scenes of "Titty Creampies #8." Pervy director Kevin Moore presents fun, POV-style footage so viewers get the perspective of pumping out the creamy cleavage climaxes! Dirty blonde MILF Danica Dillon gives lip-smackin' head and says Kevin's cock in her greased globes sounds like dick in pussy. Naturally, massively stacked Cassidy Banks is happy to have Kevin spying on her; she shimmies her cum-slathered sweater meat. Kevin blackmails busty cutie Brooklyn Chase with a photo of her cheating on her boyfriend, and he makes her talk with him on the phone as her jugs and mouth work Kevin's prick! When Kevin casts flashy blonde bimbo Courtney Taylor in an "exercise video," she's soon topless and working out with his prick. Blonde Nina Elle strips down to hot tan-lines and squeezes her ta-tas around Kevin's meat for a bouncy boob fuck, and he gets her pussy too. Cartoonishly buxom Asian August Taylor's E-cups and the cocksucking urge with which she says she was born entertain Kevin. Diamond Foxxx rubs the semen from a titty cream pie into her skin.

Write a review about Titty Creampies 8: