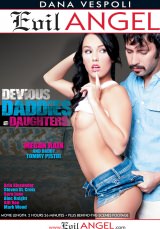 Devious Daddies & Daughters Summary: Lusting for the secret thrill of taboo relations? Then depraved director Dana Vespoli's "Devious Daddies & Daughters" will hit close to home, but beware: This is no family entertainment! Vespoli taps into primal cravings in four psychosexual scenarios: Young, petite Megan Rain, cute in tiny jean shorts and high tops, disrespects creepy, mustachioed stepdad Tommy Pistol. A hostile confrontation becomes an illicit encounter, with Tommy nailing his stepdaughter and Megan sucking dick pussy-to-mouth. Middle-aged Steven St. Croix tells pale stepdaughter Aria Alexander that her mother has been killed, but would have wanted her to pleasure him. The graying, predatory guardian coaches her through an orgasmic fuck. Cokehead Alec Knight's sassy, spoiled stepdaughter, Sara Luvv, overcomes her disgust to trade young pussy for expensive presents. She gives better head than her mother, and a doggie-style pounding makes her masturbate and grunt that his cock is bigger than she's used to. Blonde Alli Rae seduces stepdad Mark Wood, who falls for lines like, "I need to be punished by my daddy." His idea of discipline is having her repeat, "Yes Daddy," as he spanks her cheeky ass. Alli eats the semen slopped onto her face. In this movie, nasty daddy issues are just a "step" away!